In autumn 2014, my partner built us a “sunroom” off the side of our house in Kenai, Alaska. He intended to use it for storage; I intended to fill it with plants come summertime. In the first week of March 2015, I bought indoor seed starting lights and mats and seeded dozens of plants indoors–including about 30 tomato plants in five varieties. I had Romas, Tumbling Toms, Sub-Arctic 25s, and a couple more varieties I can’t recall now.

As it turns out, I didn’t have the space for 30 two-month-old plants in the spare bedroom where I kept my seedlings. That room also serves as the sewing room, guest room, dog kennel, and freezer storage. I couldn’t keep repotting them as they grew larger and larger; as a result I had several very stunted tomato starts in mid-May, when I deemed it warm enough to put them all in the greenhouse. I repurposed 20 empty, four-gallon mayonnaise buckets from work (yeah service industry!) and, finally, my 20 most promising tomato plants had permanent homes.

For the first few weeks of the season everything seemed to be doing fine. The tomatoes were growing very rapidly in their larger pots, despite an unidentified disease a few of them seemed to be suffering from. Many were flowering soon after the first of June and I was over the moon thinking about how many delicious red fruits my babies would provide me with in the fall. Alas–all was not to be well.

A heat wave came in mid-June, and I found the greenhouse to be ill prepared for such weather. The thermometer read upwards of 100 degrees during the day, even though I kept the door open and an oscillating fan blowing full-speed all day. I watered daily with much enthusiasm. I fertilized with gusto. The tomatoes grew, and wilted during the day, but kept growing nonetheless. They flowered. The ones nearest the door fruited. 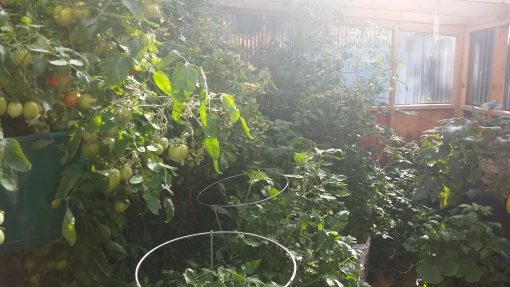 Welcome to the Jungle–it gets worse here every day!

But the rest… did not. Or they didn’t as much as they should have. I saw hundreds of dead flowers on the floor, yet my beloved plants were not yielding the fruits they should have been. The place where the flowers had been, where the fruit should be, stayed pin-sized as I inspected them day after day in decreasing hopes of ever harvesting my beautiful tomatoes. My dreams of sauces, salsas, pastes and juices galore were drying up faster than the soil on a 90-degree day.

Over the course of the summer the greenhouse remained above 90 degrees most days. I stretched a white sheet across the ceiling in a futile attempt to reflect some sun and heat. I positioned the fan in six different locations in the greenhouse trying to lower the temperature, but it was no use. I felt so frustrated! At the end of the season, with great sorrow, I threw about 16 plants that did not yield any edible fruit into the compost pile. The fruits that did manage to survive were tiny and very sour. After spending an hour or more watering each day, after the trouble of starting seeds indoors and caring for them for six months, after the constant stress and shame of having failed my little plants, I felt depressed and helpless. Never again, said I. Never again will I grow in an ill-ventilated greenhouse.

Enter 2016. Seedlings were out: I bought starts. But not before the Great Ventilation Debate of 2016 occurred between my partner and me. I wanted to install an industrial grade ventilation system, with thermostat-controlled start and aluminum shutters on a fan that circulates 1100 cubic feet per minute. He insisted, and I quote: “That is like putting a Cadillac engine in a Geo Metro.” He refused to let me spend $600 on the system, which a gardener friend had offered to install for free. He said, “That is the BEST option. This greenhouse is a piece of crap.”

Despite the fact that our piece of crap greenhouse had managed to trap enough heat in 2015 to effectively kill all our plants, he wouldn’t budge. In an effort to save our relationship–it was getting pretty heated at that point, pardon the pun–I relented and told him to get on with whatever his Geo Metro solution might be.

He bought two 20-inch box fans from Wal-Mart ($40) and framed them into the greenhouse wall. He put them on a timer (on hand). 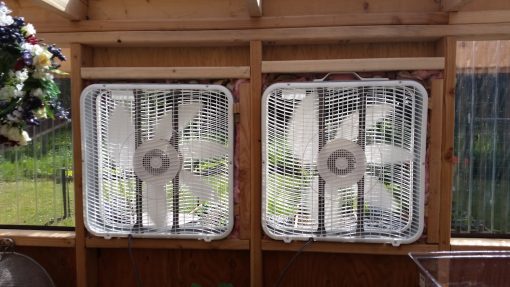 And…. the Great Ventilation Debate of 2016 was won, by him. Because they work, and they work well. Our greenhouse has not gone over 90 degrees in 2016 and is usually right at the target temperature of 78-80 degrees. I bought my tomato starts during the last week of May and transplanted them immediately. I already have some green fruits about 2″ in diameter, and June’s not even over yet! 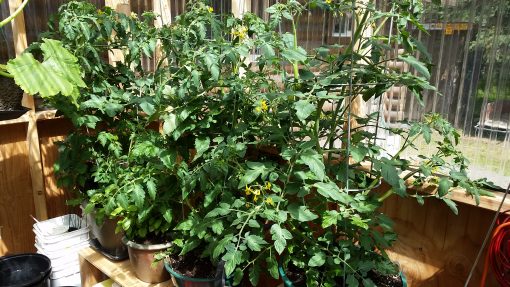 I guess the conclusion here would be…. compromise is a good idea. Or, the best method isn’t necessarily the only method. Or, that I live with the most stubborn person on the face of the planet (who also happens to be pretty smart). Or maybe I am the most stubborn person on the planet. Whatever the lesson, I have a feeling I will be making lots and lots of tomato dishes this season, and my faith may be restored enough by 2017 to once again seed my own tomato plants. Thus ends the saga of the Great Tomato Fiasco of 2015, or How I Sweltered My Way to Wisdom.

This is what I should have consulted to find a solution to my problem more quickly!

About Jenna Miller
Hello, I'm Jenna, an amateur gardener and wannabe farmer living in Kenai, Alaska. I am originally from California and am enjoying my fourth summer putzing around a garden figuring out how to make things grow in cold soil! One day I hope to know what I am talking about enough to teach someone else how to garden. I also love to sew clothes!

Hello, I'm Jenna, an amateur gardener and wannabe farmer living in Kenai, Alaska. I am originally from California and am enjoying my fourth summer putzing around a garden figuring out how to make things grow in cold soil! One day I hope to know what I am talking about enough to teach someone else how to garden. I also love to sew clothes!