Every spring, when I am lucky enough to be able to garden, it’s a race against time to get seeds or starts in the ground at the earliest possible moment, that is, as soon as the soil is dry enough and it is late enough to escape losing everything to a hard frost. Additionally, the garden needs to be ready to plant. Outside plots, beds and buckets need to be prepared. In a perfect world, it would be like a symphony with every task perfectly organized and timed to be in place for the next sequential step, culminating in the seeds or seedlings going in the garden at the absolute optimum time.

Hopefully, this will happen at some point in my lifetime. Work, life, and the weather have gotten in the way so far, but I refuse to give up on the dream.

This year’s optimum planting day came at least a week early with 2 or 3 days work ahead before there would be time to plant. Figuring I could at least soak the sweet peas, I reached in the cupboard to grab a glass jar and spotted the sprouting lids. Hmmm, why not put the sweet pea seeds in a sprouting jar and let them go ahead and sprout? That way the seeds could get started days ahead of preparing the raised bed. Along with  spinach, cilantro, nasturtiums, radishes and green peas, I started the sweet peas as if they were alfalfa sprouts for sandwiches. To make sprouts to eat, the first step is to soak the seeds in water for several hours, usually overnight. 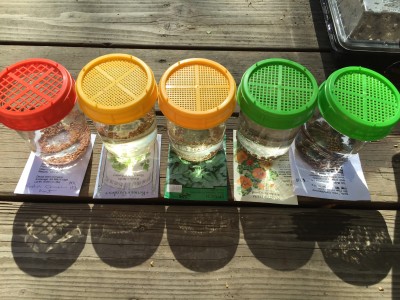 Next, rinse them through the screened lids and set them in a sunny window, rinsing them once or twice a day to keep them fresh. Special screened tops with different sized mesh for sprouting different sized seeds can be purchased at cooking or health food stores. They fit over wide mouth pint or quart canning jars. Treating the garden seeds the same way, in a few days I was rewarded with radish sprouts. They honestly looked good enough to eat, instead, they went into the now ready kitchen garden bed, along with the spinach and cilantro. A few days later the peas sprouted. 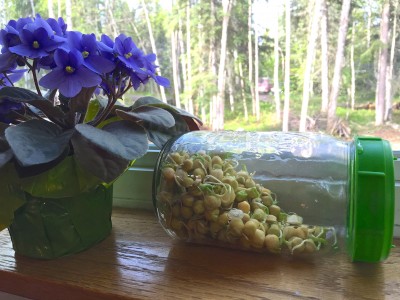 The nasturtiums swelled up but still hadn’t sprouted after a few days, and didn’t show any signs of life until planted in soil. Some seeds require darkness to germinate, and I learned later that nasturtiums need darkness. The peas and sweet peas were going into beds that wouldn’t be ready until the middle of June, but since they were ready to plant, they were planted in a flat on the porch with a plastic canopy, where they continued to grow nicely until planted. 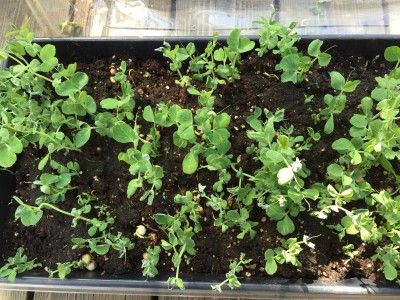 The kitchen garden was planted by the 1st of June, the peas waited until well past the optimum date this year, June 20th, but sprouting may have helped them catch up by a few days. Overall, it was a lot of fun and easy experimenting with starting seeds this way. It was rewarding to see them sprout in the jars and then see them poking their heads up so fast after planting. It was also easier to space the seeds when planting as the sprouted seeds were larger. Between using the sprouting jars and putting some (but not all) of the sprouts in flats, it allowed more flexibility with planting time. 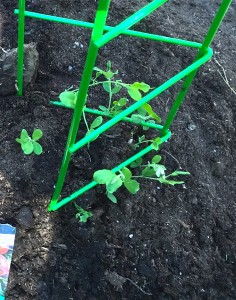 Next year, I’ll try again, adding different seeds and using what I learned this time around:    1. It is important to understand which seeds need darkness.    2. It might work out better to wait a few days to start  fast  germinating seeds like radishes, so the slow germinating seeds, such as nasturtium, can go in the garden at the same time.    3. Leaving the radishes in the jars too long caused the primary roots to dry out a bit and turn a little brown, next time I’ll have a flat ready just in case.    4. It’s important not to  eat the seeds, no matter how tasty they look, they may have been treated.    5. It’s probably OK to inoculate the sprouts with rhizobium to help them fix nitrogen, a step I left out this time.

Its hard to know if starting them this way improved growth or production over the usual soaking for a day or straight planting would of been. A control crop would be nice to see if there is a drawback or advantage to actual plant growth. Meanwhile, I’ll have all winter to research my plant starting experiments for next year.