Like many Alaskans I have spent countless summers struggling with chickweed in my garden and lawn. I painstakingly remove plant after plant until I am feeling smug about myself. Then I see “just one more plant” and I delve back in again. It’s almost to the point of needing a support group. This year I decided to try a little reverse psychology on myself and research my nemesis — know thy enemy so to speak — just to see if we could all get along.

Common Chickweed ‘s Latin name is Stellaria media, which means “Little Star in the Mist.” It is an annual of the Pink Family that produces 2500-15,000 seeds per season. Per plant. And the seeds can remain viable for 10 years. No wonder it feels like I’m fighting a losing battle. It is found throughout the world growing best in shady, moist and neutral pH soils, but it is amazingly adaptive in my yard and seems to grow just fine in dry sunny locals as well. Furthermore, it can survive winter temperatures down to 14 degrees F. The leaves are fairly elliptical with a pointed tip on a widely branched long, weak stem. A single plant has many stems that can each grow to 15 inches and can spread out to form a dense mat up to 40 inches. The roots are shallow and fibrous, and form at the stem’s nodes. The delicate white flowers look like little starbursts, and have five petals that are so deeply notched it looks like ten. Each flower lasts one day, but the plant flowers all season. Seeds ripen in five to seven weeks.

Chickweed is tenacious and recovers quickly if the roots aren’t completely removed. Crop rotation causes disruption of the growth cycle and cultivating early will help prevent desired seedlings from being overtaken by the chickweed. The seeds will not germinate if they are tilled deeper than 3/4 inch deep, but germinate quite well on the surface. It is a serious problem in commercial crops throughout the US and England, including Alaska, and helps spread the beet yellows virus by acting as an alternate host. If a lawn has just a few chickweed plants, stepping on each plant to crush it and applying soluble nitrogen fertilizer can burn and kill them. There is risk of grass burn, but the grass won’t die, as it’s a perennial.

Despite this negativity, chickweed does have a bit of an altruistic side. It’s used as an herbal medicine to treat a variety of problems from itchy skin and asthma to cancer and even weight loss. This makes me feel a little friendlier towards the weed. It turns out that chickweed has mild diuretic properties and is added to weight reduction supplements. The saponins in chickweed, like many vegetables, herbs and beans, have anti-tumor activity and help to lower cholesterol. A study published in the International Journal of Phytomedicine showed that Stellaria media extracts did well in preventing some bacterial infections as well as treating them. When made into a poultice is can calm rashes and treat abscesses. When made into a tea, it can be ingested to cure constipation or applied to the eyes to relieve strain. It can be purchased as a tincture, a powder, an extract or even as a chest rub. It can also be purchased kosher. 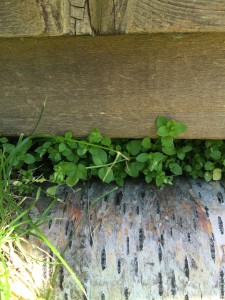 Being food motivated, I thought I’d see if I could eat it and maybe get rid of some pent up hostility through mastication in addition to reaping some health benefits. People have been eating chickweed since the 5th century A.D. and it is a common salad green in Korea. Chickweed is full of vitamins A, B1, B2, and C, not to mention a plethora of other nutrients. When I asked my husband what he thought the leaf tasted like, he said, “a leaf”; I think it tastes like a bland cross between collards and green leaf lettuce, but it wasn’t unpleasant and I would consider adding it to a salad. There are many chickweed recipes including pesto, egg salad, bread, and chickweed pie that utilize the leaves, stems and flowers. Sadly, I don’t have enough leaves and stems to try out the recipes as just prior to writing this blog I went through the garden like a whirling, cultivating dervish pulling chickweed.

Stelllaria media has many other uses. Chickweed can be used as a mini weather station. Not only do the flowers and leaves close up at night, they also fold up before and during rainfall. Where chickweed grows, the soil runoff is controlled all the while providing a living mulch and maintaining a more controlled soil temperature. German vintners plant chickweed on their slopes for soil conservation and Scandinavian orchardists believe planting it at the base of some fruit trees results in a more bountiful harvest. As it decomposes in the garden or compost pile it releases phosphorus, potassium and manganese it has accumulated. Early in the spring, chickweed provides sustenance for birds and all types of mammals with its seeds and leaves.

At the end of the day, I admit to grudging respect. It really is a pretty little plant. I will not be planting or promoting a Stellaria media patch willingly, but I won’t get so worked up about it if I see it. I might even consider harvesting it instead of weeding it.