A friend of mine worked on a very extensive winter sowing project. So extensive she had plenty of seedlings to share. After seeing what she ended up producing, I am fairly positive I am going to do the same next year. I helped her a bit during the process in which she took milk jugs, cut them in half, filled the bottom with soil, planted seeds, taped the jug back together and laid them outside in April to begin germinating. When June 1st rolled around, her jugs were bursting. All the seedlings were happy and healthy. But she didn’t have quite enough to give me a full row of corn. So, I decided to do half and half, with her seedlings filling one half of the row, and the other half with dried seed kernels from Burpee. As you can see from my pictures her seedlings are winning of course. I also added some fertilizer for veggies to my half of the row and as you can see, it’s not giving them too much of a boost. Some of my seeds don’t even seem to be popping up.

Growing up where I did in Amish country Pennsylvania, I was surrounded by corn fields all the time in the summer and picked truck loads of it for harvesting in the Fall. It’s been interesting to see what works, and does not work as far as corn is concerned in my Alaskan soil. But I know for sure, I will be doing some winter sowing next year. My corn is looking good and growing well, we will see how it looks at the end of the summer!

Here is a link to some related information to this project! 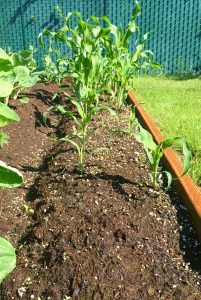