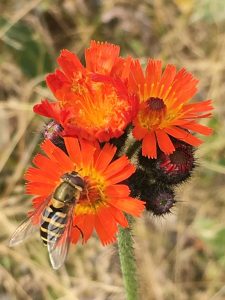 Upon purchasing our land, our terra-knowledgeable neighbor informed us that he has Hieracium aurantiacum, aka Orange Hawkweed, growing on his property so it’s likely we do as well. Not knowing what Hieracium aurantiacum was, I wasn’t sure if I should be excited, relieved, or worried. I promptly went home, searched the internet, and found a deep orange flower that I thought would add color to our landscape. I opted for excited.

After further reading, I learned that Orange Hawkweed has secured a spot on Alaska’s Invasive Species List. Now I’m worried. It appears to be hardy, steadfast, and able to reproduce several ways make it a very prolific plant. I had to decide if I was going to be okay with allowing a known invasive species to continue growing on our property or if I had to mount an attack.

Hieracium aurantiacum is known by several common names but Orange Hawkweed is the most used, and much easier to pronounce. As stated here, “Pliny, the Roman naturalist, believed that hawks fed on the plant to strengthen their eyesight and thus it became the Greek and Latin name for this and similar plants, called hawkweed.” It is native to northern and central Europe and was first confirmed in Alaska in 1961. It survives in a variety of habitats, prefers sun, and well-drained soil. I found a description of the plant properties in a publication by the USDA Forest Service that forms an excellent visual depiction and is definitely worth reading. Briefly summarized, the perennial grows 10-36 inches tall with flowers heads at the top; the stem is covered with hairs and contains a milky substance; flowers bloom June to September; seeds are produced by the flowers and the seeds can live up to 7 years; roots grow as both stolons and rhizomes. 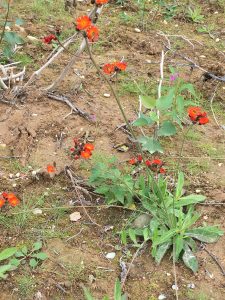 Hawkweeds form a monoculture which reduces plant diversity. They squeeze out native plant species and establish a patch. They also hybridize with other native and non-native Hieracium and are allelopathic (thanks to Wikipedia, I learned that it’s a biological phenomenon by which an organism produces one or more biochemicals that influence the germination, growth, survival, and reproduction of other organisms). If I were grazing animals at this point, I’d be unhappy as the plant will decrease pasture grasses. Something to keep in mind as our plans for the land develop.

So, now I’ve learned that they reproduce by seed, stolon, and rhizome. How will I ever stay ahead of them? I have to determine how serious I am about allowing this flower to live on our property. If I don’t want them, how do I get rid of them? Mowing reduces the spreading of seeds, but increases the vegetative spread. Digging is difficult as you have to get deep enough to get all of the rhizomes and roots. Perhaps I need to consider chemicals.

There was a greenhouse study at the UAF Matanuska Experiment Farm and two field studies done in Homer and Talkeetna. This paper describes the experiments in more detail than I can possibly summarize, or even comprehend, but I learned that Alaska does not allow the use of some herbicides. I don’t have much experience with chemical weeding, but I’m guessing you don’t get this from the gardening section in your local department store.

Across those experiments, only aminopyralid and clopyralid, at their highest dose recommended for this plant, controlled Orange Hawkweed consistently, with greatest injury observed one year after treatment. In a grassy pasture, where grasses are preferred, aminopyralid had the advantage as it took out other broadleaf species. In a field environment where vegetative variety is preferred, clopyralid is expected to leave behind greater diversity of species after application. I’m relieved to learn that eradication by chemicals can be successful if I apply the product as outlined by the experiment.

Am I stronger/more stubborn/determined than Hieracium aurantiacum? Or am I happy with the unique color they offer and too lazy to get serious? How bad are they really? What if I let them grow? I had to find out how bad my infestation was to determine if it was worthy of an herbicidal treatment. I walked the property and found plants growing here and there in the open areas not protected by trees. It appears I can’t prevent the flower from crossing the lot line, but at least I didn’t see any large blankets. Maybe I have a chance to get ahead of this potential problem. At this point, I’m going to try digging the individual plants before they seed between June and September. It’s the end of June now and I’m behind! I’m off to dig these orange beauties! 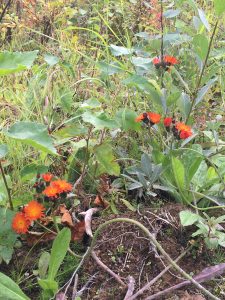 One thought on “Hunting the Hawk(weed)”