Years ago, I was a late comer to a marvelous children’s book called The Secret Garden by Frances Hodgson Burnett, who also wrote A Little Princess, which was made into a movie in the 30’s starring Shirley Temple. Unfortunately, most film adaptations of The Secret Garden are nowhere near as magical as the book. 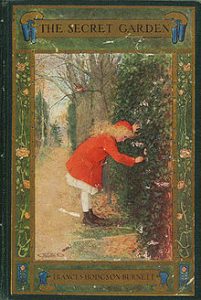 The book starts out in late winter with the arrival of the young Mary Lennox to a relative’s (an uncle) manor on the English moors. Her entire family has just died while in India. However, Mary was a neglected child, so she was more upset by the loss of her nursemaid than by the loss of her parents, who occasionally trotted her out for a few minutes at parties, and then sent her away to be the responsibility of the rest of the staff. She arrives in England, an angry, unhappy child, and, again, becomes the responsibility of staff because her uncle travels a lot.

She is given a skipping rope and shoved outdoors so as not to be a nuisance. Children being children, Mary starts to explore the grounds of this vast estate, meeting Dickon, a brother of one of the housemaids, and crotchety Ben, the gardener.

Eventually Mary discovers a door in a wall hidden by masses of ivy. She discovers the key by watching a robin scratching for worms. On entering the garden, Mary realizes she has entered a special world and enlists Dickon, who is about her age, to help her with the garden.

This garden had been locked away by her uncle whose beloved wife had died in the garden by accident. No one ever spoke of the garden or of what had happened there. Mary also discovers that her uncle is not only hiding the garden, but her cousin Colin as well. She could hear Colin crying at night, and finally found him and gave him a piece of her mind.

To make a long story short, Mary and Dickon begin to take Colin to the garden in his wheelchair (his illness is psychosomatic), and the three children begin to grow and blossom as the the garden does the same in the approaching Spring. It is a magical book, and if you feel, as I do, that gardens are magical places, you will blossom with this book as well. I recommend reading it when winter has you down, and I guarantee it will help you survive until the spring.