Last week I was lucky enough to stumble onto an article previewing the local garden tour. Emphasis on preview because I had not yet missed the tour. As I continued reading the article I was further delighted that it was nearby and I had no plans that could not be moved. The descriptions of the gardens were what hooked me in though–nearly each garden featured a potential solution to a problem I had been trying to solve in my garden on my own. Brilliant!

Garden design and landscaping are not a new challenge and there are many fabulous books, a plethora of magazine articles (I’m a sucker for Sunset articles – www.sunset.com/garden/landscaping-design), as well as websites (www.gardendesign.com) written specifically about this topic; however, most books specific to Alaska gardening only have a small section (if any) that addresses landscaping. There’s just something of a leap of faith between reading something that sounds and looks appealing in a book and translating that to the space you have. I have seen some disasters in translation, realizing after much time and labor that it would never end up as intended.

Experience has taught me that starting with an inspiration (raised beds with trellis) from a book that I love (The Shaker Garden by Stephanie Donaldson) that I think would work in my garden might morph into something different as installation is attempted. Much like remodeling a house. Magazines and books are lovely to look at for ideas, but the design ultimately has to work for the space you have. For those of us who didn’t get the magical envisioning gene, the second part of that is a little challenging. This is how I got into trouble in the past and why the garden tour hooked me.

I mapped out the gardens on the tour and was treated to glimpses of neighborhoods I never knew existed. A couple of the gardens were not at all obvious from the street, which made me wonder what treasures their neighbors were harboring in their back yards. All of them were beautiful and had obviously taken a lot of time and thought. Some had hills and creative ways of using space, things which don’t apply to my mostly flat space.

One garden had a collection of thyme, which I wanted to see, mostly because I was interested in what varieties have done well here. I am thinking about planting thyme as a ground cover between stepping stones in my front yard where I don’t want grass at all. I was inspired by what I saw–healthy plants that looked as good as I thought they might, and in a similar setting to my intended application. 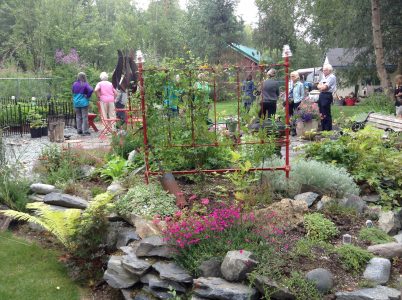 Another garden had recycled a painted bed frame with electrical insulators to serve as a trellis. Which is what I went there to see–the use of recycled items– but not the best idea I came away from there with. I realized the overall landscaping at this yard would be very suitable for large dogs and plants to coexist peacefully (potentially). That was before I saw the dog toys by the back yard. There are grass areas closest to the house and gate which are great for fetching and tuck-tail running (and trees to run around). There are also some mounded areas with rock borders (like a raised bed but less angular and structured) planted with predominantly ornamentals. 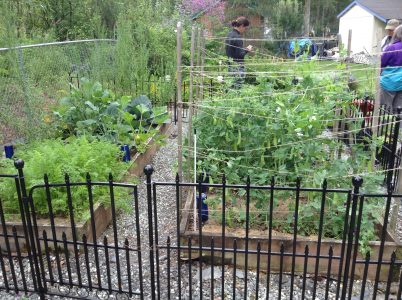 But the real crown jewel for me was a garden area similar to the garden I loved from the book with a twist or two that made  it much more practical for my yard. Placement of the garden was  further away from the house in a corner of the yard which at first seems like a pain for harvesting for dinner but keeps it out of the dog energy dissipation zone. I loved the gravel path instead of stepping stones set in sand shown in the book design (I used recycled bricks previously) for ease of installation. I think it also really defines the different space for the dogs and maybe even naturally slows their pace. I would never have thought to put a pretty fence around it (I’m far more utilitarian normally), or to remember to leave space between the beds and the fence. I also would not have thought to extend the gravel beyond the fence. I am quite sure they do not have my problems with cutting the grass up against the raised beds which usually fails and I end up hand pulling the grass/weeds. It’s brilliant all around!

I left the tour reinvigorated to return to my yard and look at it with fresh eyes. These are just a few of the most immediate ideas that came to me. I’m sure more will appear out of the mist as they are needed. I encourage you to tour gardens for inspiration for your own yard–at home or when traveling. I can almost see my ugly duckling morphing into a swan. Almost.

One thought on “Touring Gardens for Design Inspiration”