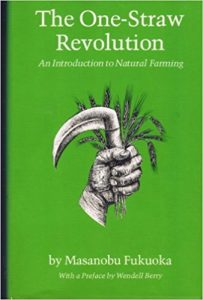 “The ultimate goal of farming is not the growing of crops, but the cultivation and perfection of human beings.” — Masanobu Fukuoka

As a 15-year old I moved from rural New Hampshire to suburban south Florida. I quickly grew disenchanted with the artificial environment and found a paradigm for understanding the modern disconnection of humans from nature in Daniel Quinn’s “Ishmael.” Upon graduation, books including “The Unsettling of America” by Wendell Berry and “The Good Life” by Helen and Scott Nearing inspired me to apprentice as a luthier on an organic farm in Nova Scotia. My time in Nova Scotia strengthened my connection to nature and played a pivotal role in my decision to study ecology at the University of New Hampshire. While volunteering at the university’s organic farm, a friend recommended “The One-Straw Revolution: An Introduction to Natural Farming” by Masanobu Fukuoka. This relatively short, yet deceptively insightful book undoubtedly became my favorite gardening book and through reading it, I helped Fukuoka’s agricultural revolution grow.

Fukuoka began his career as a plant pathologist with the Japanese government in the 1930s. After a hospitalization due to pneumonia, he experienced an epiphany. The basis of his epiphany sounds nihilistic, as he writes, “In this world there is nothing at all… I felt that I understood nothing.” However, I take this to mean that Fukuoka recognized the insufficiency of intellectual knowledge, and he later expounds, “Science has served only to show how small human knowledge is.” He quit his job and returned to his wealthy father’s land in southern Japan to tend their citrus orchard.

During World War II, Fukuoka again worked for the Japanese government as a plant pathologist, but after eight years, he returned to Shikoku Prefecture and developed his natural farming philosophy. This philosophy has the four basic tenets of no cultivation, no chemical fertilizer or prepared compost, no weeding by tillage or herbicides, and no dependence on chemicals. Fukuoka was prescient in his holistic understanding of ecological systems, organic farming, and permaculture. He provided practical methods for growing rice, barley, rye, vegetables, and citrus while simultaneously creating a philosophy that pertained to much more than just farming.

It is the philosophy of this book which motivates me to come back to read it again and again. Fukuoka’s philosophy places emphasis on being in the present, and this part of his philosophy has helped my gardening by teaching me to enjoy the entire process of working with plants. To simply be in the moment is difficult in this modern world, but approaching the present with a beginner’s mind and a willingness to make mistakes are what makes Fukuoka’s philosophy so alluring to me.

I encourage you to take a break from this hectic world to read “The One-Straw Revolution.” Hopefully, this book will offer you a fresh perspective and a renewed sense of patience the next time you’re in your garden.

“Whether autumn will bring wind or rain, I cannot know, but today I will be working in the fields.”