After years of daydreaming about having a farm of our own, the day is finally upon us. Toting a little log cabin, our partially cleared acre is surrounded by the hushed boreal forest. We call it Alaska Tiny Farm. My husband and I live here with our daughters (ages seven and five), two dogs, sixteen chickens, a rabbit, and two thousand red wiggler worms.

Staking its claim off a quiet dirt road on the edge of the eastern Alaska Range, our new home is both remote and heavily treaded… this is the first Alaskan town visitors pass when driving north, and boasts being both the dog mushing capital of the world and the coldest inhabited place in North America. Dog teams frequent the abundant trails, and grouse and snowshoe hares outnumber the community’s year-round residents. In the summer, the sun barely rests, the days are warm, and RV traffic is a common sight. In the winter, temperatures frequently drop to -40 or colder, and on winter solstice, the sun is out for just four hours. Most businesses are abandoned, and travelers are rare after October.

When we first visited the property, we were charmed by its potential. Before we even readied the cabin for human inhabitance, we converted the 12’x8’ shed into a chicken coop, built a fence, and filled it with a dozen Wyandotte pullets, three feathery silkies, and an alarm clock (AKA, a rooster). We are now getting six golden brown eggs a day, and we are hoping that number continues to increase as the hens mature. We have framed in and insulated a smaller area inside the coop so the body heat from the chickens (104-107 degrees) should keep it warm enough, assisted by their downy feathers, plenty of fresh straw, and a lightbulb on a timer for consistency during the dark days ahead.

It is already late-October and temperatures are reaching the negatives. Our timing may not be the best, but since we did not get an opportunity to plant a garden this summer, we have decided to dabble in indoor gardening this winter. We’ll be experimenting with herbs, vegetables, and flowers. I found a garden shelving system at a thrift store this summer, which came with a plastic cover to create a warmer, more humid environment for our plants. I ordered seeds, a seedling tray with a cover, a heat mat, planters, and LED grow lights. With some caring hands and patience, we should have fresh greens growing this winter.

The most recent component to our tiny farm… we got mail! We just received two thousand red wiggler worms from Uncle Jim’s Worm Farm. They are happily living in our kitchen in a homemade worm bin. We now have several venues to turn our food waste into a valuable resource. Between the dogs, chickens, rabbit, and worms, we have many options on what to do with our scraps, from veggies to fruit peels, grains, meat, coffee grounds, and egg shells. Organic materials never go in the trash, and shredded scrap paper makes useful worm bedding.

Next summer, we will be building a greenhouse and raised beds so we can grow healthy food that can be preserved and used throughout the winter months. We would like to look into adding horses and goats to the mix, the former for hunting, packing, and exploring, and the latter for delicious milk, yogurt, cheese, and also because goat kids are adorable. Ducks are also high on the wish list, with their nutritious eggs, ability to imprint on humans, and usefulness in the garden. Unlike chickens, they eat garden pests (and especially love slugs) without harming the plants.

With multiple moving parts to this operation, there is much to learn, and many projects to complete. It is an active life, and I get satisfaction in working with my hands, watching my seedlings germinate and my plants fruit. I can see the benefit firsthand of having multipurpose animals, and in raising children alongside them. My daughters are developing compassion and leadership, going as far as building a “worm hospital.” They take pride in caring for their animals and doing their part for the environment. Everything seems to grow around here except for our bank account, but the growth that I do get to see every day is what makes farmsteading a fulfilling lifestyle. 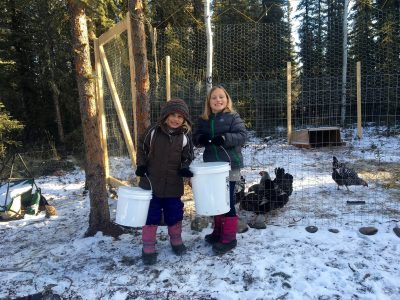