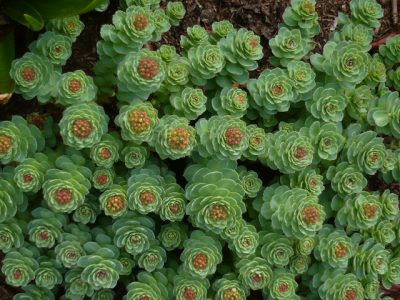 Rhodiola rosea L.is currently being explored as a commercial crop in Alaska. Several news agencies have given exposure to this emerging crop in Alaska. Some research suggests that our climate, like its native Siberia, produces more potent compounds to be used as a supplement. This plant should also be of interest to the home gardener as a landscaping plant, or part of a medicinal herb garden. R. rosea L. has constituents that have been reported as adaptogens, meaning they help manage stress (Trease & Evans, 2009, p. 35).

R. rosea L. is a short species reaching only 12 inches in height that is adapted to rugged growing conditions. The species is adapted to arctic regions and high altitudes. It is primarily found in high latitude regions such as Northern Europe and Northern Asia. Several fleshy stems extend to flowers with four petals and sepals. The flowers are typically yellow but occasionally red tipped. The species are perennial in nature and are sometimes referred to as stonecrops.

R. rosea falls within the Crassulaceae family. Crassulaceae contains 35 genera and 1500 species. Many of these species are xerophytes, meaning they are adapted to regions with little water available. Often the species of this family contain large amounts of isocitric acid. The CAM cycle is prevalent in this family and may account for some of their shared characteristics. The carbohydrate sedohepulose is found within the Crassulaceae family and contributes to the research of biological cycles. Both cyanogenetic and cardiac gycosidees occur in some species and make them important in heart health research. Tannins are also common in the family and have an association with anti-cancerous properties (Trease & Evans, 2009, p. 29).

The genus Rhodiola has many species and is closely related to the genus Sedum. The exact number of species contained within the Rhodiola genus is not agreed upon but most of the species are found within Asia and specifically China. North America has about three species and most of these plans are associated with high latitude and high altitude. Many species within this genus are used in traditional Chinese medicine and other traditional uses around the world.

Rhodiola has been known to many cultures but has only recently become prominent in western civilization. R. rosea may have been studied by the Greeks for its medicinal properties. In its native distribution the Scandinavian people included R. rosea as a part of a supplemented diet and to treat certain ailments. The Siberian region of Asia is a prime spot for R. rosea growth and anciently was used by the peoples of that region (Brown, 2005). As the Russian empire expanded settlers of the area used this species. Traditional teas were brewed and used in fertility ceremonies. At certain times it was used as a trade item between the many different peoples of the Eurasian region. Many of the traditional uses are unknown to western civilization due to the tension that existed between western nations and Soviet bloc countries (Brown, 2005).

The Scandinavian countries and Russia did early research on the health benefits of R. rosea. Various and perhaps even spurious assumptions were made about the species during the early development period. Russian studies were not made available to western scientists and much of the research may have never come to general knowledge. Most studies done on the species revolve around its use as an adaptogen to help combat both physical and mental stress. The species and its qualities has been studied extensively both chemically and pharmacologically. Constituents of the species are flavonoids, various glycosides, and lotaustralin (Brown 2005).

Similar to other herbal supplements the quality and sourcing of the species are major concerns. There is some concern over the increase in wild harvesting driving down the stocks and hurting the survivability of the species. Most of the harvest comes from Russia and some have voiced concerns over the possible adulteration of product due to local graft. As with most herbal supplements the timing of the harvest, handling, and processing of the species are crucial and the products on the market potentially vary greatly in quality. The greatest need currently is a safe and reliable supply of pure R. rosea supplement. Long-term research should also be encouraged to understand the long-term benefits and affects of the supplement (Booker, 2016).

One thought on “Rhodiola Rosea: Medicinal Plant for Alaska”