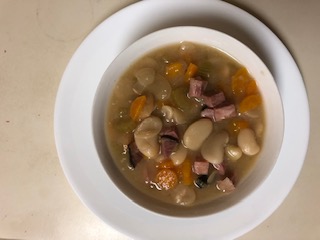 For my choice of recipes that utilize some of the things I’ve grown this season, I went with one I like to make in the fall and winter to help fend off the chill and that’s Lima beans and ham. In this recipe I get to use some of my home grown carrots and garlic that grew this summer. In the past, I’ve even included some Yukon Gold potatoes in the recipe, but they are optional. I always try to do an overnight soak for my dried one pound of Lima or navy beans, but if in a time crunch I’ll go with the traditional quick hour soak after bringing 10 cups of water and beans to a boil and removing them from the heat and covering. After standing for an hour, I’ll rinse the beans and add about 6 or 7 cups of water and bring to a slow rolling boil between medium and high heat. Then as the after begins to boil I will add to the pot: 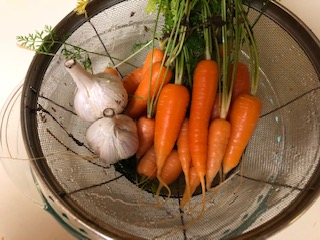 After adding all ingredients and returning the pot to a slow rolling boil with the lid just slightly ajar on top, I’ll check on the pot using a timer every 15 minutes for the next 90 minutes to 2 hours. After that time, SOUP’S ON! I will then suggest to anyone to salt to their own taste as I never add salt to this dish during the cooking process since there is no telling how the salt from the ham will effect the outcome until it’s done.