I’ve been thinking a lot about air quality lately. When I look out my cabin window, the familiar mountains are veiled behind a thick, smoky haze. For most of us, you don’t need to look at a map these days to know that Alaska is on fire. One glance out the window, one breath through your nose and it is obvious that the beautiful, hot, and dry spring created the perfect conditions for wildfires. Whether near or far, the fires in Alaska will affect each and every one of us and, hitching a ride on the wind, the smoke created here will travel the globe.[1] 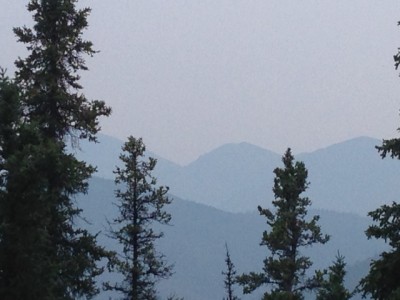 Smoky view from my cabin.

As unpleasant as they can be, wildfires are part of an important ecological process, helping ecosystems to maintain vegetation diversity. Fire initiates a critical process that breaks down organic matter into soil nutrients, making those nutrients once again available to plants. This in turn will provide a diverse habitat for wildlife, and we all know how important wildlife is here in Alaska.

Even though I know it is an important natural process, I can’t say I’m a big fan of all the smoke! Wildfire smoke has an obvious effect on  air quality, filling the environment with unpleasant materials such as particulate matter, carbon monoxide (CO), volatile organic compounds (VOCs), and ozone (O3) forming chemicals, none of which are very good for your health. Healthy for the ecosystem? Yes, but not so healthy for us. During this time of dire air quality, I began looking around my cabin and wondering about whether or not it is true that common houseplants act as natural air filters. Are my houseplants really working as champions for the health of my lungs?

Regarding those “unpleasant materials’ mentioned earlier, the plants thought to be most effective at filtering and reducing their presence in the home are:

While there are many websites touting the benefits of common, hardy houseplants as air purifiers, actually trying to find the specific research that backs up these claims isn’t straightforward. The majority of the claims are based on a famous 1989 study (it even has its own Wikipedia page!).

The NASA Clean Air Study[2] researched natural ways to clean the air in space stations. The study found that under controlled conditions, certain houseplants removed as much as 87% of indoor air pollutants within 24 hours. And, according to the study, this efficient air cleaning could be accomplished using as few as one plant per 100 square feet of indoor space. Sounds pretty amazing, huh?

Well, it gets even more interesting! Researchers had initially assumed that the plants removed the chemicals by absorbing them through the leaves during photosynthesis. However, when researchers removed the leaves of the plants, specifically the leaves directly covering the soil, they found that the percentage of chemicals that were removed from the air actually increased. This led the researchers to speculate that microorganisms in the soil were responsible for the decrease in chemicals. In the end, the researchers found that the most effective way to remove the airborne pollutants was using activated charcoal in conjunction with the plants. The charcoal was thought to remove high concentrations of pollutants and hold onto them until the roots and soil organisms were able to use them as food.

Now, before you run out and fill your house with charcoal and soil, let’s have a closer look shall, we?

Not everyone is a fan of the NASA study. It has been criticized as not being tested in the “real world’ and as a result some people question the applicability of the results to plant-loving households. Field tests that replicate the conditions in a home or office would be the best way to test these theories, however I could find no conclusive results reported from field testing.

The biggest critic of the NASA study seems to be John R. Girman, who as of 2005 was working as the Center Director for the U. S. Environmental Protection Agency (EPA) Indoor Environments Division Center for Analysis and Studies. A chemist by training, one of the many things his center is responsible for is analyzing studies on indoor air quality, like the NASA Clean Air Study.

In an undated memo titled, “Comment on the Use of Plants as a Means to Control Indoor Air Pollution,’ he challenges the results of the NASA study, calculating that, according to the results of that study, even with the most favorable conditions it would take a total of 680 plants in a typical house to achieve the same level of pollutant removal as the NASA study achieved in the test chambers they used. 680 houseplants seems a bit excessive even to the most ardent of plant lovers.

His criticisms and analyses are thoughtful and thorough. You can read his full comments on this study on the EPA’s website.[3]

Even then, large numbers of plants could be themselves toxic to the environment. Phil Morey, a biologist with Clayton Environmental Consultants in Norristown, PA, cautions that there is a large amount of evidence that supports plants are themselves a source of VOCs. Plants have adaptations for insect defense, some of which are in for form of semi-volatile compounds that sit on the surface of the leaf. [4]

Regarding plants and ozone levels, a more recent study on the effects of three common houseplants on indoor ozone levels was published in 2009 by a research team from the Pennsylvania State University[5]. Their research methods were similar to those of the NASA study, involving closed chambers, which could also mean that similar criticisms could be made about the study’s real world applicability.

In the NASA study’s defense, they were testing for practical applications on an enclosed space station, not our living rooms. Hopefully in the future researchers can work along side the EPA to use research methods that will yield more conclusive results on whether plants actually do make a difference to the air quality in our homes.

In the meantime, whether houseplants like Chlorophytum comosum and Epipremnum aureum are purifying the air in my cabin will remain a mystery, but if nothing else they are beautiful to look at on those days during fire season when I need a break from the smoky outdoors. Whether they purify the air or not, plants provide their own inherent therapy and I myself and happy to be a part of that experiment.

One thought on “Indoor air quality and plants–clear as smoke?”