It seems the 2X2 cross pieces for the elevated beds in post 1, 2, and 3 were not quite enough to support the weight of a cubic yard of soil. I noticed that one was sagging badly on July 17th. I thought that I would have to look into that on Sunday afternoon when I got back to the church. Well by Sunday afternoon all of the squash plants were either buried under the soil that pushed out the bottom of the box or were sitting on top of the soil that was lying on the ground. My modified box design seems to have been inadequate for the task at hand. 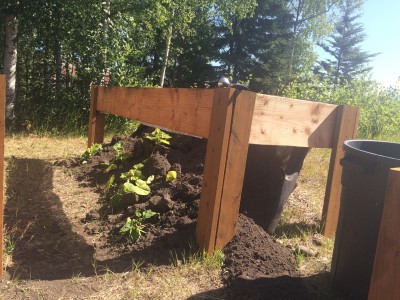 I decided to purchase some cedar 2x4s to replace the 2x2s that were in my original design. But before I could do that I had to remove the plants that were on the surface carefully with a shovel. I then shoveled soil into a wheelbarrow and put it back onto the “dirt pile” until enough had been removed to get the landscape fabric and the hardware cloth removed from the broken 2x2s. I cut the 2x4s I had purchased to the proper length of 36 inches and installed them the same way I did the 2x2s originally. 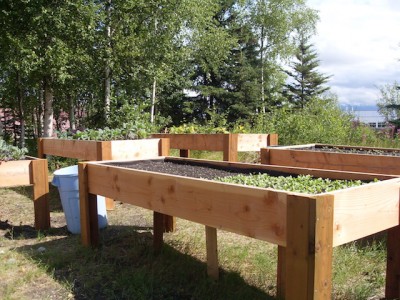 The 1×3 cross pieces were then attached to the 2x4s, the hardware cloth was attached and then landscape cloth. I then once again filled the box with soil. Using 2x4s as cross pieces on the bottom of the box will definitely fix the problem. The box will be an inch and a half shallower and may not be suitable for some roots like carrots. The problem could also be remedied by using 5 or 6 2x2s evenly spaced on the bottom instead of just 3. The box I for some reason put four 2x2s in certainly sagged much less than the others.

Once the box was refilled I again planted the squash in the box. There were only about half of the original plants surviving so it didn’t take long. I watered them again as you would do to transplants in the beginning. I thought surely these plants had been so abused that they would just die. However, there are now new squash set on the plants and they seem to be doing well.

The other boxes were sagging as well. I reinforced the bottoms by propping them up with treated 2x4s that I cut to length and then hammered into position so the box bottoms would not collapse as the squash box had. So far this remedy is holding everything together and there will be no more failures. We are hopeful to get a few squash, some broccoli, brussel sprouts, kohlrabi, kale, radishes, and lettuce from the boxes. With a little luck we will also get beets and carrots too.