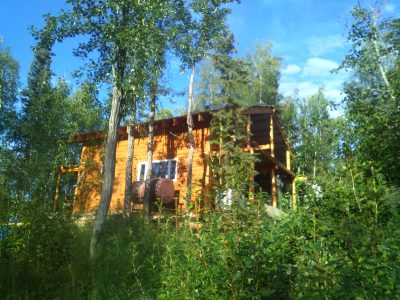 Cabin in Galena near Yukon river

While being surrounded by family and friends that garden, this summer finds me having endeavored into the art of growing a small variety of tomatoes for the first time.   There are so many lessons to absorb.   In addition to wading through the learning curve of germinating seeds, transporting starts and watering appropriately, a quality location was needed to build a greenhouse.   Having constructed our family cabin on a small plot located on the north bank of the Yukon, the most logical place appeared to be down the trail near the river.   There is plenty of light exposure, access to water and a view that spans for miles.   A challenge facing that scenario, as with many of my construction projects, is that the north bank is slowly giving way to erosion.   The solution was to make a structure that was easy to move, but large enough to house 30 plus plants that I dreamt of harvesting later this season. 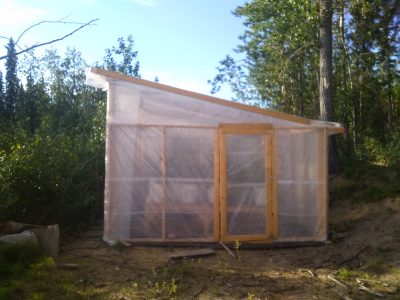 After collecting an array of ideas and suggestions from UAF Cooperative Extension, I chose a relatively level spot 40’ from the river’s edge to build a 12’ by 16’ greenhouse with a gently pitched roof.   The long walls are two separate 8’ by 8’ panels made of nominal 2’ by 4’ boards that weigh less than the usual spruce pole or ruff-cut lumber I typically use. The gable ends measure 8’ x 12’ and roof panels extend 8’ x 14’ in order to provide rain protection and airflow through the eave openings.   Each individual panel is stapled with 6 mil plastic string reinforced poly sheeting.   Wall panels are fastened to each other with 5’ hex bolts, as are the roof panels.   The roof is secured to the walls at each corner and center junction with metal straps fixed with easily removable screws.   Two 1’ by 4’ boards were secured to the exterior to prevent strong winds pulling the sheeting from the staples and also to provide structural integrity in the form of cross bracing.   Before winter arrives, rigid clear fiberglass sheeting will be added to each roof panel, in order to bear the weight of accumulated snow.   If needed, the bracing, bolts and straps could be removed to allow two people to simply pick-up and move each panel to a new location.   Additionally, two 16’ two-sided logs could be fastened beneath each long wall that would add the option of dragging the entire structure.

Not Too Hot, Not Too Cold 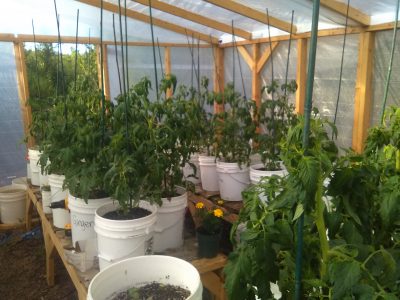 While still very much a work in progress, it is a relief to have a home for each tomato plant that occupies a 5-gallon bucket or tote.   Managing conditions within the greenhouse has presented a number of modifications that have assisted in achieving desirable temperatures, air-flow and light exposure.   The greenhouse has had no issues heating up in the afternoons, but maintaining morning temperatures above 60 ° F has been a challenge.   Initially the containers were arranged directly on the ground throughout the available space.   Too cold.   Promptly, two 8’ by 3’ benches were erected that supported 16 plants each and a third has since been included to provide more adequate space.   A strong wind storm made evident that too many gaps beneath some sections of the sill boards allowed cold to enter and warm air to exit.   Bagged fiberglass insulation has since been positioned to lessen this issue and a sandbag in each corner serves as anchor weight.   Measured foam board has been placed within each eave slot that allows for temperature and air-flow adjustments and a shelf has been positioned above the height of the plants that supports a small fan and radio.   Some trimming of willow, alder and balsam poplar next to the greenhouse has prolonged light exposure during the late evening hours. 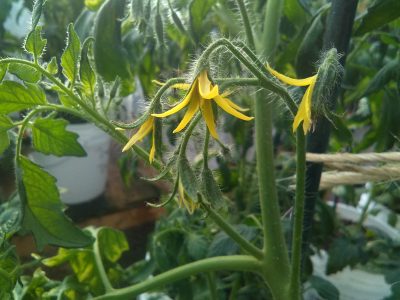 Conditions in the greenhouse seem to be stabilizing nicely, between 60 °- 65 ° F in the morning and 75 ° – 85 ° F in the evenings.   It is difficult to tell how much my attempts are contributing, as the ambient weather has been about perfect lately.   Near the latter part of June, small buds were forming on most of the plants and now a third display a sprinkle of beautiful yellow petals.   The Sub-Arctic 25 variety seems to be doing very well; all 10 are flowering and have shot up to a height of over 24’.   Following, in general order of robustness, are Bush Supremo (i.e. Solanum Lycopersicum), Tomato Siletz and Window Box Roma.   I’ve fertilized with an organic variety, Happy Frog Tomato and Vegetable, with an N-P-K of 7-4-5 for an 18 pound bag.   So far, the plants have not shown any significant signs of stress or presence of pests and with a little bit of luck I hope to see fruit set appearing in the near future.   My finger’s are crossed… 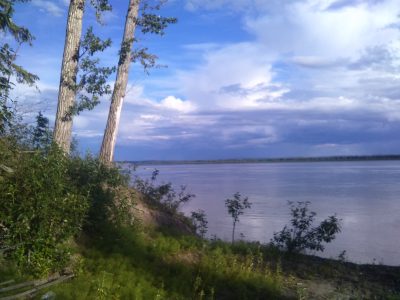 View of the Yukon from greenhouse door.