My neighbor has been saying for years that we should try seaweed in our garden. I brushed it off until a recent beach walk had me looking at the shoreside debris in a different light. The sea grass snaked along the coastline in rows that reminded me of hay drying in the fields right before the baler came to scoop it up. I did a little online research first and then just felt silly for living and gardening here for years and never using it! It’s free and readily available and is loaded with minerals and nutrients the soil needs, in addition to being a mulch and pest deterrent. The complete package. One of the readings that I enjoyed most was from the Vegetable Gardener. The Royal Horticultural Society had some general information on the topic as well.

I wanted to find out from the research if there was a particular kind of seaweed that was better than another or if there was anything else I needed to know. I couldn’t find anything that said specifically not to use a certain type, so I scooped up some of that beautiful sea grass I had seen earlier. Of course, any time there is work like this to be done, it’s best to employ a toddler. If you don’t have one of your own, check with your neighbors. They might have one they would be willing to loan out for an hour. Luckily I have my own. 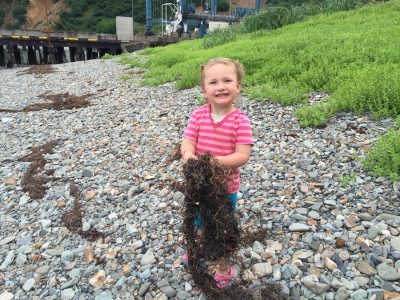 BUT DOES IT WORK?

Different gardening blogs had conflicting advice. Some said “wash it,” some said “don’t bother.” (This lazy gardener went with the “don’t bother” advice!) Somewhere in a comment a gardener had reviewed that their plants turned yellow. I decided to only gather enough for a small area and put it around plants that I wouldn’t be too devastating  at losing. It has been three weeks. The plants look great. I put it around some perennial flowers that are still growing and I don’t think it’s my imagination that they have grown bigger and brighter in those few weeks. I also haven’t seen as many slugs in that area of the garden either! Hooray!! 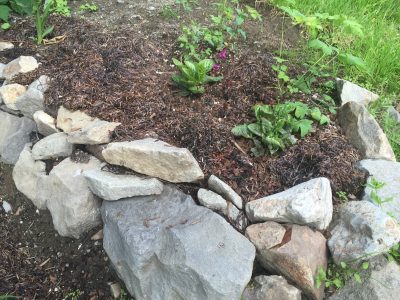 I will definitely be gathering more after I come back from vacation at the end of August. I’ll use it mostly for mulch but also put some in the compost pile. I’m interested in trying the “tea” that several of the blogs mention to spray on foliage but I won’t be doing that until next growing season.

BEFORE YOU HARVEST, CHECK THE REGS!

Before you harvest seaweed, please review all applicable regulations for your area.