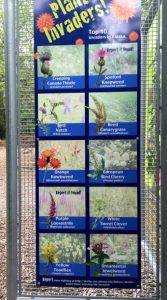 To Pull Or Not To Pull? Is It Native or Invasive

Invasive plants affect all areas of Alaska and need to be addressed by all Alaskans. Learning to identify invasive plants, animal and species can help reduce, if not eliminate, the negative effects such as complete elimination of native species. A great example is the chokecherry trees which are not native to Alaska. These can be found in yards, parks and along roadways demonstrating how aggressive the plant is. Three common species found in the Anchorage area are the Amur chokecherry, Canada red chokecherry and May Day tree. These can be dangerous to moose and streams.

According to the Department of Fish and Game there are several “pathways or vectors’ through which invasive species can be introduced. One pathway is “Human-Aided” which can be improved with education. Various routes included are: 1) contaminated cargo shipments arriving by air, land, or sea; 2) restoration, development or shipping projects that can inadvertently carry seeds, spores or larvae from one place to another; and 3) intentional or unintentional releases or introductions of aquatic species’.

Native: Plants that live or grow naturally in a particular region.

Non-native, exotic, alien, non-indigenous: Plants whose presence in a given area is due to the accidental or intentional introduction by humans.

Naturalized: Non-native plants that reproduce consistently in their new environment and sustain population over many life cycles without direct intervention by humans.

Invasive: Non-native plants that produce viable offspring in large numbers and have the potential to establish and spread in natural areas.

Weed: Any plants, native or non-native, whose presence is undesirable to people at a particular time or place.

Noxious weed: A plant species that has been legally defined a harmful and unwanted because of its potentially negative impacts to agriculture, fish and wildlife or public health.

The Alaska Natural Heritage Program through the University of Alaska Anchorage is available for public access providing information about “plant and animal and species of conservation or invasion concern”. This program was developed because of “limited resources available for managing invasive species that may be directed towards the most threatening species.” This site provides concepts of invasiveness and ranking, plant morphology and how to use this guide along with species description illustrations examples as seen below: 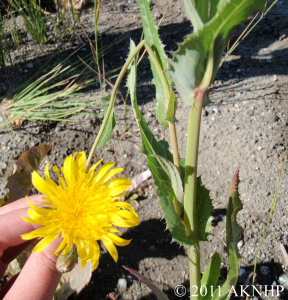 Stem:   Glandular hairs on flower stalks and upper part of the stem

Leave: Clasping at the base, basal lobes ear-shaped and small

On each floret, the ligule is approximately equal in length to its closed tubular section

Interior boreal: northernmost records on the Dalton and Elliot Hwys near Livengood; also in vicinity of Delta

Remarks: There are two subspecies of Sonchus arvensis:

As noted above, species are ranked from zero to 100, with the Perennial sow thistle ranking at 73 points indicating it a more invasive species. Helpful tools to identify invasive plants include various guidebooks, 10x magnifying glass or handheld lens and 6′ flexible plastic ruler.

There are numerous guidebooks and resources available to assist in identifying invasive plants, animals and species.   A few examples include:

A few examples to watch for  include these listed below from Invasive Plants of Alaska. Resources listed with each name:

Leaves and stems are covered in fine hairs without spiny leaves as found on thistles. Infestations have been reported along Turnagain Arm by UAF Coop Extension

Found in the Upper Huffman area of Anchorage, AK

Leaves are kidney-shaped the first year and heart-shaped the second with white flowers and a strong garlic odor.   Juneau residents have been fighting to eradicate the plant with “infestations near the governor’s mansion. Traditionally the plant was used in soups and salads.

This species decreases the quality of habitat for wildlife and aquatic animals.

Reviewing the various families and utilizing the sources listed above to familiarize yourself with invasive species can help you recognize these when out hiking, camping, boating, picnicking, and berry picking. Any invasive species found should be reported to your nearest University of Alaska Cooperative Extension Services Office immediately.

Perennial sow thistle taken by AKNHP and posted in the accs.uaa.alaska.edu Invasive Plants of Alaska

2 thoughts on “To Pull or Not To Pull? Is It Native or Invasive?”