One day I was hungry so I looked around the kitchen and found that there were eggs, potatoes, garlic and cheddar cheese, so I made them into a delicious scramble. I made it several times for my family and I, with varying quantities of the ingredients until I decided to make it into a proper recipe with repeatable results.

Because I was making it into a recipe I thought that I might as well improve it at the same time. I was eating chili pepper on eggs a lot so I decided to add chili powder. We grew potatoes so I used them instead of store bought potatoes. We have chickens that were laying at the time so I used their eggs. We grew some tomatoes so I diced one up and and put it on top. After several attempts using my family as test subjects (they were glad) I got this recipe, which is the best version and a pretty good recipe.

Mix the eggs cheese garlic and chili in a small bowl. Melt a small slice of butter in a small pan on medium high heat, then add the potato and brown it, then fry the potato until soft. Once the potato is soft pour in the egg mix and stir frequently until cooked, then sprinkle the diced tomato on top and serve. 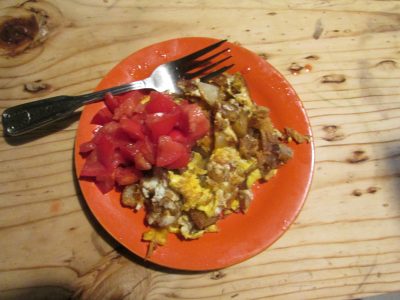 For basic instructions on having your own chickens click here.